After his win in London against Pablo Carreno-Busta in London Dominic Thiem was talking to Leif Shiras at the SkyPad and it was fascinating to hear the Austrian open up about his performance more interestingly his overall game.

He admitted to going for power as it feels safe to him but is it hindering his progress? I think so…

Thiem’s game is like playing at 100mph throughout the whole match there isn’t much le-way and once plan A is out of the window it’s like watching a capitulation.

Thiem is a very talented player and has shots on his racket to mix it up so the question is why the power?

“My strokes are even safer when I hit full power, they get a bit unsafe when I hold back.”

Maybe holding back isn’t a bad thing, you won’t win a major going 100mph all the time even on his favoured surface of clay where variety is key. 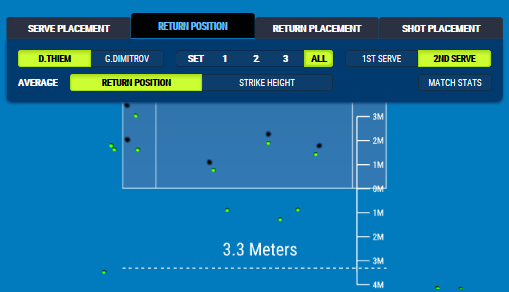 I think this graphic above shows that need to go for power that he has.

God knows why Thiem is 3.3 metres behind the baseline returning Dimitrov’s second serve when on first serve he was 0.6 metres behind. He wants the time to line up for power and sometimes points go on too long with Thiem, you see opportunity to kill it off but it’s this stubborn style of play focusing on going for that power all the time reduces his effectiveness which reduces his efficency which isn’t as effective on a hard or grass court.

Everyone’s game needs to adapt to become a champion, playing one way because it is safe won’t win big titles. To win big titles you need variety and playing safe won’t do it you have to win ugly at times and I think it speaks volumes about his top 10 wins this year that his only win against a top 10 player on a hard court was his last win of 2017 against Pablo Carreno Busta!