Year on year tennis evolves and moves on and one part of the game which amazes me is the ability of players whilst defending. The adaption to be able to be effective whilst deep and defending on the court is something which has grown but I don’t think it is something you can always teach.

Some of the best defenders on the tour are Wozniacki, Murray, Djokovic, Halep and Dimitrov. They dig deep and their movement especially towards the forehand which for them is a one handed shot is frightening at times.

I did a piece a while back where I said how important foot work is in tennis even though a lot of focus in training is based on shot making but you need that steadiness with the feet to make these shots effective. Novak Djokovic did skiing and it’s something which helped with his movement on the tennis court but isn’t something you’d put together but you can see how it helps as on his day his movement is second to none.

I find the forehand on the run the toughest shot for me. The other night I spent a good amount of time on my footwork and timing towards the ball. Now sometimes you don’t have time to think about the stride which is why the slide helps as you have a bit more freedom going for the ball. 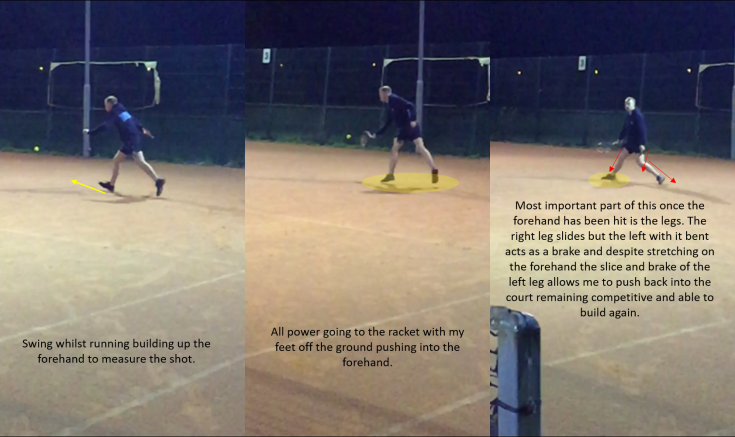 Above you can see me going into the sliding forehand. I always find the forehand a tricky shot to play. Despite being a lefty I play a two handed backhand and one handed forehand so putting that power off the forehand can be tough which is where the feet help as seen in the picture.

Like I said at the beginning of the piece one of the best in my opinion is Grigor Dimitrov with his movement and that slide into the forehand they make the impossible likely and we can see this below. Dimitrov won this point!

The game has moved on a lot and to be successful on the tour you need this in your game to be able to adapt and survive in difficult moments of a rally.