Dominic Thiem is one of the big challengers to Rafael Nadal on a clay court however the Austrian hasn’t been involved in the action as much as he would like over the last month or so with this ankle injury that forced him to miss Miami.

No one should expect miracles from Thiem over the week as this is his first tournament back but there were some things that impressed, improved throughout the match and will naturally come with game time.

Improvement throughout the match is something I like to see as it’s easier to continue to do the same thing which necessarily might not be working but credit to Thiem to switched up his service return which is a big reason to why he has moved into the next round.

You can see Thiem is 3.5 metres behind the baseline returning serve as he and Nadal do on clay as they are so good at defending on this surface they can afford an extra look at it. 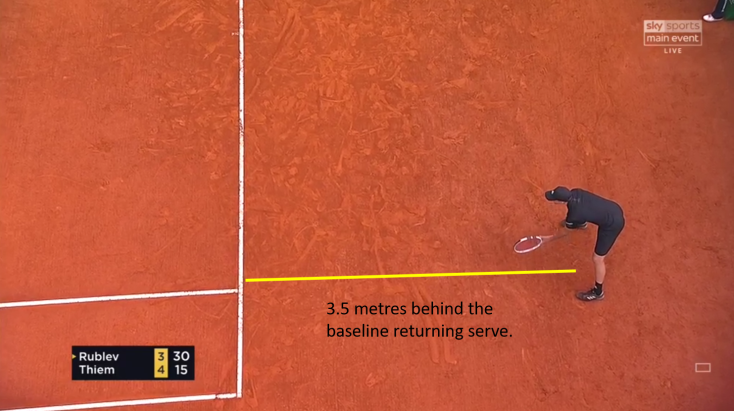 However if you are playing against someone like Rublev who isn’t the strongest server and is dropping his second serve in at 75mph if you are returning this deep with a backhand as Thiem does it isn’t getting any depth and Rublev could come in and dictate.

During set two we did see a slight change in a few games. Thiem went from using the one-handed backhand return which was dropping short with power allowing Rublev to pounce and take control but swapped it for the chip return, no power and depth on the court forcing Rublev to work harder. 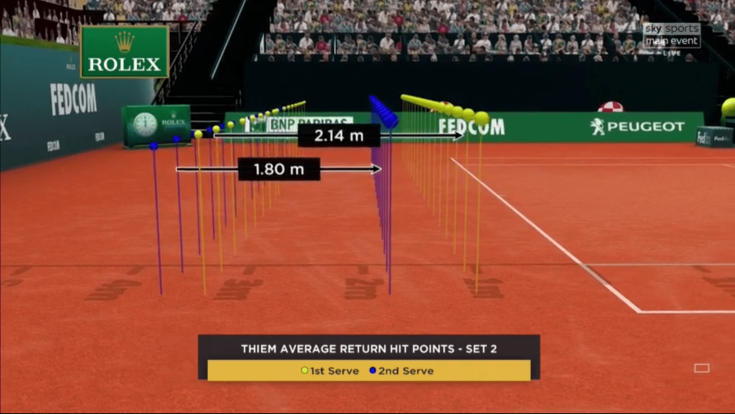 Now you can see above in set two Thiem created more chances using this chip return and standing closer to the baseline forcing the Russian back.

I was confused to why Thiem wasn’t using the chip return more often despite it being effective and generating break point opportunities.

The lack of consistency on Thiem's return of serve is baffling. He's getting his best opportunities chipping it but rarely using it. In the two games he's used it he has got 3 BP opportunities.

He figured it out and then went back and did the same in set three, he took a 4-1 lead and then found himself 5-4 down with Rublev serving for the match. It was bizarre. Rublev was broken serving for it and then double faulted on match point with Thiem winning in three.

It took the Austrian a while to adapt to the conditions, his condition and the way Rublev was playing but once he stepped up he found what he needed to do. He did backtrack but he knew whether he would sit deep which wasn’t working or stand a little closer which he did more in set three as the match progressed staying aggressive would give him a better chance giving Rublev less time to line up the forehand he likes to use out wide and down the line.