Novak Djokovic’ performance against Roger Federer was near on perfect.

Throughout the week in Cincinnati Novak’s performances were a little bit shaky but this one against Roger was something else, it had it all and he has sent out a massive statement ahead of the US Open.

The first part of his game I want to look at is returning serve.

Federer has one of the best serves in the game and if Novak could get a deep return on it then he slowed down the Swiss number one and he did precisely that.

Most of the time Federer is looking to go big on serve with top spin and wants to step inside and begin unleashing the forehand to work the rally but you can see the pressure Novak put on Federer.

The third shot of the rally this is a great position for Novak to be in but for Federer it makes things much more difficult.

This deep returning was a theme throughout the week for Novak. 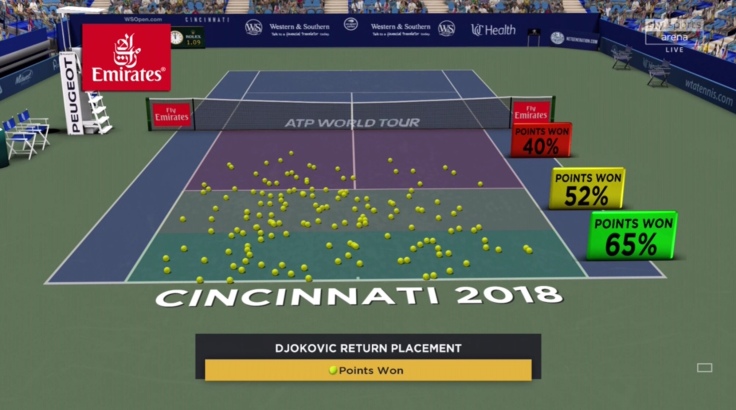 The Wimbledon champion won 65% of points in that bottom of the baseline and you can see on the graphic how deep some of them were!

Novak because of his athleticism can afford to sometimes take a risk and we saw the full extent of his unbelievable movement and his plan to stick to the baseline winning more than double the baseline points Roger won and he stuck his ground only going to the net once in almost an hour and a half.

He asked the questions and Roger just didn’t have the answers on a special performance from the Serb who has to be considered as favourite in New York now!