The last time Rafael Nadal played a professional tennis match was at the US Open before retiring.

Since then he has had surgery on his ankle he has played exhibition in Abu Dhabi but lost to Kevin Anderson from a set up, now he is top seed in Brisbane and plays a returning Jo-Wilfried Tsonga who defeated Thanasi Kokkinakis in round one.

So, lets have a look at this new serve and what to expect from it…

We have only seen the serve once so far against Kevin and in honesty I’m not a fan. 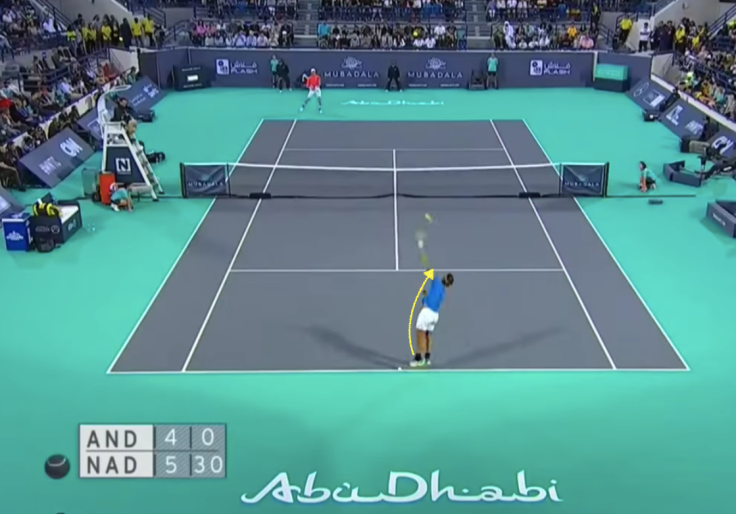 First thing you notice with the serve is there is less body rotation, this is probably changed due to how testing the game is on your body.

Less rotation however gives the opponent more to read into a serve.

Fast-forward on a second…

The ball hasn’t even gone over the net yet but Anderson is ready to return. That usually doesn’t happen with that kick/swing lefty serve.

So what has changed?

Less Rotation
More of a snap serve when he strikes the ball – makes it more predictable?

Fast-forward just a few more seconds from the above screenshot and were now here;

How many times does this happen? Ok, it is first match of the season but it doesn’t bode well going forward.

I’m not to sure what to expect, I think it is quite easy to play against. Instead of having that top-spin and creativity we have now gone to a flat serve and I’m not to sure how it will pan out across the season.

On the flip side, maybe this is just something we will see on hard courts as that is where despite a great season last year is where he struggled at times but on clay it was almost faultless.