If you need a master class in hitting the inside-in and inside-out forehand than look no further than what Kyle Edmund just did!

Kyle sprayed that forehand perfectly throughout the match, the angles he created and the pace and depth he got on the ball time and time again was beautiful execution from the British number one. 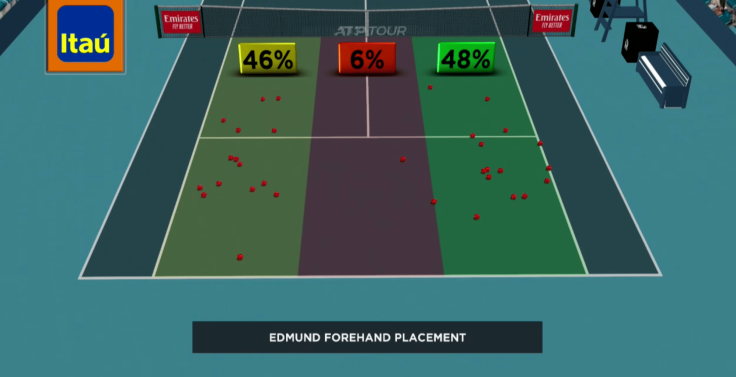 You can see from the graphic above with ATP TennisTV the positioning of the ball from Edmund’s forehand during the first set. To get to that split takes a lot of work as to get one forehand accurate with the way he executes is tough but to get two takes some work.

I often go on about depth and depth is important but if you look at this graphic with no context and just on the image then you would question but that is how good the forehand of the Brit was that he executed it with great pace and top spin that he didn’t need to go for the baseline to be effective.

I wish there was a graphic which shows you where Kyle would have stood to hit these shots so I have put this together to show the ground covered to execute this shot around the baseline.

It is good to see Kyle playing so well again after a bit of injury trouble in Melbourne which he recovered from and that challenger event he played at Indian Wells prior to the Masters there has really helped him find some form and settle back into the tour again.