The running was relentless, the tennis was on another level as Simona Halep lifted her first Wimbledon title but what were her biggest weapons in her incredible win?

The forehand is her best weapon and I mentioned earlier on in the tournament she seems so confident with it. It had pace, top-spin and deep penetration as you can see from the graphic against Svitolina in the semi-final. This isn’t good hitting but incredible hitting from Simona Halep. Halep has one of the best forehands in the game it goes missing maybe on quicker courts as she doesn’t sometimes have that extra second to elevate it towards the baseline with top-spin or elevate a flat forehand. Just look at the success rate, she is hardly losing a point. When you add confidence to this good hitting then you’re in for a good performance.

You can see the mixture of down the line forwards on the left but also the inside-in body rotation and pull it down the line as shown on the right.

Something I spoke about in Melbourne and revisited recently was the need to go back behind opponents and at times playing in-front of them can shoot yourself in the foot.

I wrote this in mid-June about Halep needing to find her ruthless streak and gave examples of her defeat to Serena in Melbourne of where she changed it up and how it helped.

Simona Halep needs to stop giving out invitations and find her ruthless streak!

I’m pleased to see that ruthless tennis from her and she explored going back behind Serena to win points.

It’s a great tactic. What does going back behind give you? It nullifies the attacking power in that rally of your opponent. You can see Serena’s whole body movement is shifting cross-court expecting the cross-court forehand from Halep.

It isn’t impossible to stop and try and defend but you cannot defend and play a shot with interest.

If Halep went cross-court Serena is potentially in control now and could finish at the net but reversing the ball will reverse momentum.

This one below is similar but different;

Serena’s body movement is there to cover the backhand down the line but Halep is going for it.

Before Wimbledon you would have said that’s coming back. This time it didn’t, confidence! She buried that backhand with power, just about clearing the net down the line. It is my favourite shot in tennis, if I can pull it off it just feels soo good!

No one covers the court better than Halep and when she is playing with this confidence the ability to play incredible shots on the run is second to none. I said during the final, it’s like watching ‘roadrunner’

The ground she covers and the winner she hits is just unbelievable, Serena can only applaud which she did a few times.

Remember earlier on in the piece I spoke about the forehand down the line against Svitolina? Well, here it is in action against Serena; 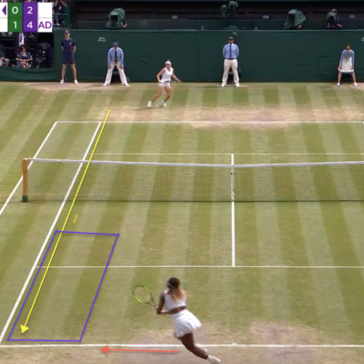 Same scenario. The way she run and pull it off or stand, that forehand down the line was brutal!

For me it was the best tactical performance ever. The way she redirected going back behind even on the run to go from defending to attacking in rallies was incredible. Her stance on the baseline going big off the forehand and even trusting the backhand like she did and of course the movement.

Out of the 92 points played in this final Simona Halep only hit 3 unforced errors. Now that is something else!

2 thoughts on “On The Run 🏃🏻‍♀️; The spectacular tennis of Simona Halep!”