One of the fun stories of this years US Open has been the tennis of Taylor Townsend.

The 23 year old is set to be back in the top 85 on Monday when the rankings come out following her epic run in New York.

A straight sets win against Sorana Cirstea set her up to play Bianca Andreescu but there was no comeback from a set down this time.

Her serve and volley tennis has been fun to watch, effective but in the end was an over-reliance and naivety what cost her?

I’m all for different styles of play and Taylor has shown it does have a place in our sport still. We’ve seen someone like Stefanos Tsitsipas use it on big service points very well but doesn’t visit it often.

With serve and volley I’m left either applauding or awkwardly squinting and I did more of the latter against Andreescu.

What I liked about Taylor’s approach is it got players thinking. She served and volleyed excellent against Halep. She got after everyone’s serve and the plants a seed of doubt when you see the opponent begin to creep forward. Her approach left Halep with a mental block because she couldn’t figure it out.

Andreescu had it spot on.

Early on I felt we saw the pattern. Andreescu from what looks like a very difficult position would be the one asking the questions. 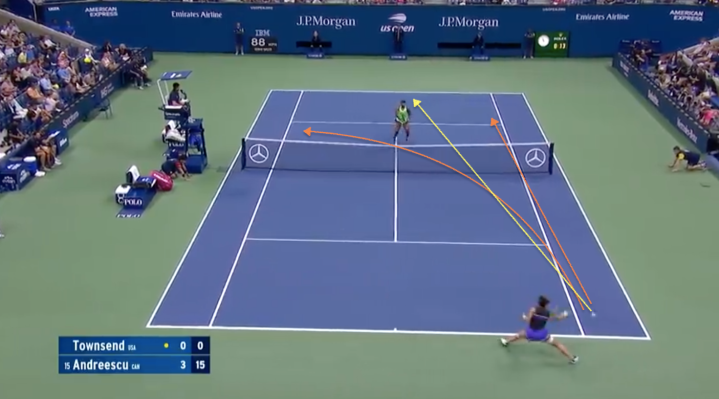 Orange arrows show Bianca could have hooked the forehand cross court or exploited the down the line. Both are difficult shots. So, what do you do? Go at the body.

I’m not meaning Nick Kyrgios style at Wimbledon against Rafael Nadal but whenever the ball comes fast at you moving feet and hands is difficult. 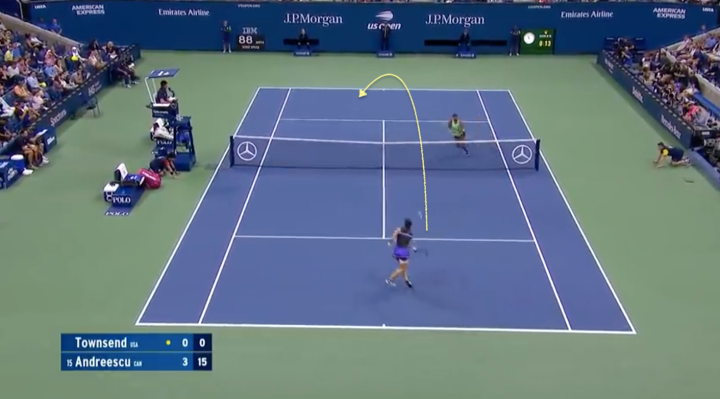 The next one, the phrase ‘no mans land’ comes into play.

Bianca’s serve didn’t pull up any trees and that caused an issue for Townsend.

Do you attack it or hold back?

Right now, at 2-1 40-30 Taylor is not in this one. This is what I meant by awkward squint because we can all see what is going to happen. For Taylor to even be effective she must be a yard or two inside the service box and shifted to the right.

Did I see this result coming? I did but I’ve loved watching Taylor and I really hope this is the start of something for her now.

The only issue I have with this style is of course first couple of rounds the attention is there, the excitement is there but it will be figured out.

Like I said at the beginning of this piece, Andreescu had it spot on.

I don’t think we are in a moment where you can just rely on this game. I think she did superb in her previous rounds but it fell down.

Open this up with some numbers;

5 winners in 25 games from the baseline and a massive 24 points lost at the net when you consider Bianca had a greater winning percentage there.

In this performance against Andreescu was there a naivety and over-reliance? Yes.  Now the challenge is to build on her game and build around it to make her more effective in matches. With Taylor’s ranking set to hit top 85 getting into tournaments makes it easier and if she can hold it then she will be in main draw of Melbourne come the New Year.