The greatest compliment you can pay someone is no one wants to play them.

That is the case for Daniil Medvedev.

It has been one of the most incredible breakthrough seasons on the ATP Tour for the relentless Russian.

It kicked off with a first Masters 1000 semi-final in Monte-Carlo followed by back to back to back final appearances at Masters level too winning two of his three finals in Cincinnati and Shanghai.

Titles in St. Petersburg and Bulgaria have added to a stellar year as well as appearances in nine finals overall this calendar year including the US Open final.

Down two sets and break against Nadal he took him to five sets and as he says he just goes out to do his job and win matches.

He has eight top 10 wins this year and only had to come from a set down once against Djokovic to win in the semi-finals of Cincinnati.

I love his game, but I get why players would prefer to swerve.

Is he the best mover at the back of the court? No, but he gets the ball back time and time again. It is never ending.

There is a lot I like about his game. He has such a slick and delicate disguise on his drop shots and his backhand is more guided than punchy but his forehand catches the eye. 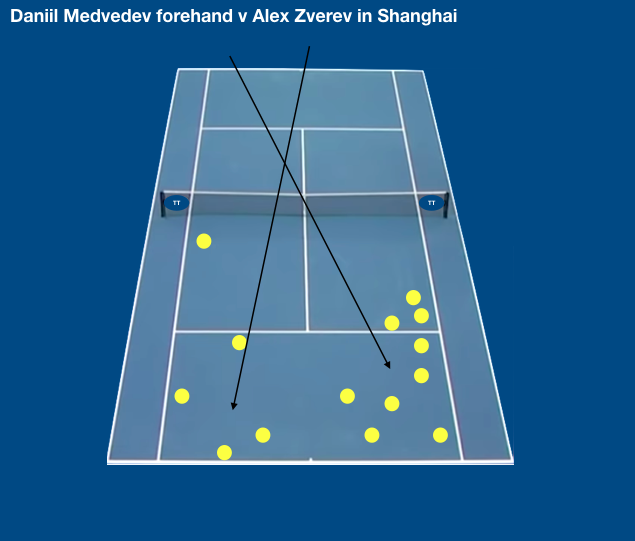 It’s relentless and we saw this against Zverev in the Shanghai final.

This is just a collection of some of his forehand shot placement against Zverev. The key is to move and once he got his teeth stuck in midway through the first set he didn’t look back.

He does favour that one cross-court but when the ball sits up and in London those courts are pretty slow he will take it on.

There just isn’t a shot he struggles with. He has it all going for him right now. If I were to be picky and it would extremely picky then it would be the backhand.

I said around the US Open final would he benefit from a more punchy shot than guided with a bit more speed? The benefit would be shorter rallies but that would be being extra picky.

It’s a compliment to his tennis.

I can’t think of a player who will be looking at the draw and thinking I’d be up for playing him. I’d think they’d rather play Djokovic or Federer because Daniil has been the best player on tour for some time.