Twelve months ago I watched Stefanos Tsitsipas take on Frances Tiafoe in Milan at the Next Gen Finals. The American lost the match 3-4 3-4 2-4 against the Greek in a performance I described as having too much swag and not enough steel.

Frances Tiafoe now heads to Milan once again and I’m still yet to see it come together for him.

I criticised the mid-match arm pump celebrations because he didn’t back it up with a win, celebrate when you win.

He reached a career high of 29 following his good run to the quarter finals of the Australian Open but hasn’t done much since. He goes into Milan with 21 wins and 25 defeats this year which compared to the others around him is not good enough and is always outside the top 50.

He is the most experienced playing going to Milan despite De Minaur having more titles to his name, he has more matches under his belt. He turns 22 at the end of January and right now I don’t get it still.

I watched him against Taylor Fritz in Paris and it was a match he had chances in.

He won 12 of the 15 rallies over 9 shots in the match so he does have to grit in his game to dig deep but decision making is a bit off and can be rash.

It was very much good shot followed by bad shot during the match. He was very good at the net winning 15/21 points but the rash hitting cost him. In recent defeats to Sinner, Wawrinka and Zverev he’s gone the distance but lacked that steel.

I mentioned the defeat to Jannik Sinner in Antwerp not long ago and Frances will play him on Tuesday night in Milan with a slight point to prove. 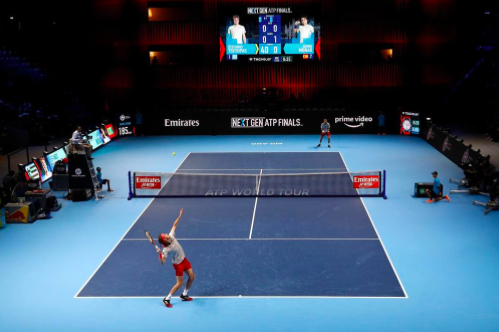