There are no doubts to Garbine Muguruza’s skill on a tennis court.

The former number one has had it tough over the last couple of years. A lack of confidence has led to her decline down the rankings but a change to her team seems to have sparked the Spaniard back to some fantastic tennis and her level against Svitolina was ruthless in her 6-2 6-1 win.

Good numbers. If I were to be picky it would be the first serve in but Muguruza stood so strong behind her second serve during the match.

Two things I want to focus on and they are the depth of shot in a rally and that backhand down the line.

Muguruza’s timing on the backhand is probably one of the best in women’s tennis.

She knows when to mix it up perfectly and where to place it. A two backhand down the line is the goal but it takes some work.

Muguruza likes to spread play and it is what she needs to do, she isn’t the best mover behind the baseline but works into a position well going down the middle with the backhand with depth and looking for that short ball.

That short ball when it came for the Spaniard is an invitation to hit down the line and she took it time and time again against the fifth seed as you can see below: 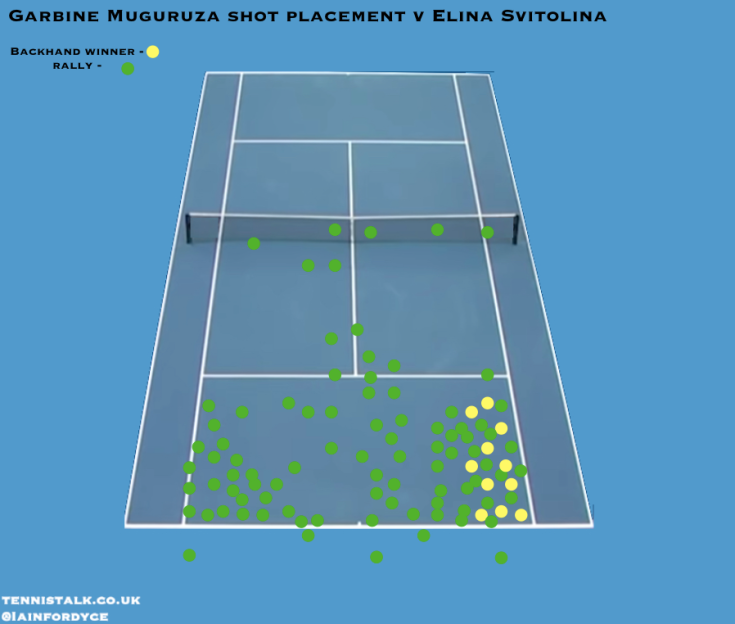 The yellow shows the backhand winning spots from the Spaniard in what was a well crafted shot from Muguruza.

Hitting the ball deep requires confidence because you know what you want to do.

If you aren’t confident then you begin to spray the ball and it becomes messy but the depth Muguruza consistently hit at was outstanding.

If you split the court into three: deep, medium and short you can see the constant depth Garbine found with her ground strokes.

It takes a lot to continue at this level of hitting during a match let alone talking about doing it time and time again. The closest person who is doing it right now in tennis is probably Djokovic or Halep.

Muguruza peppered Svitolina who had no answer for her and found a lot of joy going deep into the forehand of Eli who should be concerned with her opening few weeks of 2020.

I’m pleased that we have seen this level from Muguruza, I don’t think the praise is getting carried away at all. She turned up without her best run of results for a while, ill and got bageled to open her first match to come through that is a testament to her character!