On Saturday, one lady will win their first Australian Open title.

For the fifth year running it will be another new name on the trophy but who?

Garbine Muguruza is a former two time Grand Slam and a former world number one. The Spaniard has been in inspired form at this event with Conchita Martinez back in her box everything just seems happier and this has been shown in her tennis too.

Muguruza’s coach, Conchita Martinez will be inducted into the Tennis Hall of Fame later this year and is the last Spanish woman to reach the Australian Open final in 1998.

Her opponent is the energetic Sofia Kenin. I like Kenin’s game and her personality.

She is quite hard on herself but her achievements over the last twelve months have been incredible and this just tops it off.

Sofia has only been 21 for a few months and she’s having an incredible time right now.

I’ll be honest, there wasn’t much to shout about in the match with Barty, it was very cagey and tight.

One thing I was impressed with about Kenin is that she didn’t panic at all or try to push too much to make things happen. Against Muguruza however I do believe she has to try and be a bit more proactive.

Muguruza set out her stall and even when at times against Halep things weren’t going as she stuck at her game plan and it was fantastic. Muguruza moved into the net well following her backhand struck the corners of the court well with her forehand and backhand down the line.

Muguruza and Kenin have played each other before and it was last year in Beijing towards the end of last season. Kenin won 6-0 2-6 6-2 against the Spaniard but this is a different setting and you imagine nerves will play a part on both sides of the court. 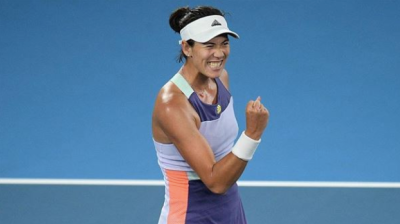