A title win at the Australian Open is an excellent way to begin the year. Two weeks of tennis down in Melbourne where the weather has varied came down to two players. Garbine Muguruza and Sofia Kenin would battle for the title.

Muguruza looked the more comfortable early on, she did have to hold from 0-30 in her opening game but after both got their first serve out the way it was the Spaniard who settled quicker.

This did culminate in an early break of serve for Muguruza who began to dictate as rallies progressed. Once she got on the baseline and opened up her forehand she re-directed the ball and took control.

The first looked to be coming to a quick end at 5-2.

Kenin fell 0-40 down on serve, Muguruza ended up having a look at four break points but couldn’t convert. That rattled Muguruza who should have sealed the set and ended up dropping her own serve to take the set back to 4-5.

The intensity ramped up and this time it was too much for the American who threw away her service game and the opening set.

The response would be key from Kenin.

As ever she looked pumped up and ready and at the beginning of the second set looked like a new player. Back to back love service holds and a break of serve and the momentum had shifted!

Muguruza found herself in a difficult position, she began to look a little lost but the level from Kenin just didn’t drop. After holding for 5-2 with an inside-out forehand she made her way to her chair after bouncing the ball with frustration and ready for the next challenge.

Sofia was ready but Muguruza wasn’t. A backhand return winner down the line set up the first set point and a backhand under pressure from Muguruza levelled the match!

The tension was set, Muguruza began to find some of that tennis from the first set and after four games nothing could separate them!

The experience of Muguruza orchestrated a three break point advantage on Kenin’s serve. The 21 year old came up with three stunning down the line winners to get to deuce!

An ace, another winner and a pumped up American. Incredible hold of serve from Kenin who continued to stay ahead!

Having had three massive break points of her own the pressure told for Muguruza who double faulted at such a crucial time and Sofia was two points from the win of her career!

The emotion of the moment was there on the face for everyone to see as Kenin extended her lead to 5-2 and a game away from her first Grand Slam title!

For the third time in the match Muguruza came up with back to back double faults and Kenin quickly went onto set up a match point!

As one was saved, Muguruza double faulted again and Kenin won the title! 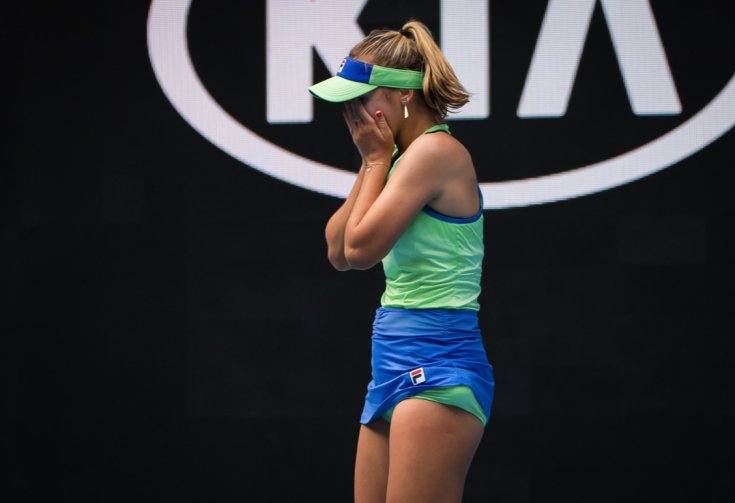