It has been a limited 2020 season on the tour but in this short space of time one player that has really impressed is Simona Halep. The Romanian plans her schedule with the bigger picture in mind now and it’s leading to more consistency.

Halep began her season quite late, she didn’t play Brisbane or Sydney and decided to begin in mid-January in Adelaide. Halep went out in the quarter finals to Aryna Sabalenka but it didn’t stop the Romanian pushing forward in Melbourne.

I thought that Halep played some of her best tennis in Melbourne, there was just a lapse in the performance against Muguruza. Following a break she then went and won Dubai with a fantastic effort and opting to skip Qatar.

One of the stands out for me has been the Simona Halep forehand and the question is, is it one of the most underrated shots in tennis?

Over the years the Romanian’s game has adapted and become more consistent and especially her forehand which at times in the past could be hit and miss.

Not just this year but the consistency she has shown in events to win big titles including last year at Wimbledon which you can read more of below:

On The Run 🏃🏻‍♀️; The spectacular tennis of Simona Halep!

The way she creates space and opens up the court is fantastic and this shot has become one of the most stunning shots to watch in tennis.

You can see Putintseva highlight at the bottom and from here she can’t commit. Despite Halep being on the run the options she has because of her athleticism and her trust with her forehand is dangerous.

Halep can smash it down the line or cut it cross court from here. It is a down the line forehand from the Romanian and the speed and power it came through the court was incredible forcing Putintseva just to throw her racket at it without interest. 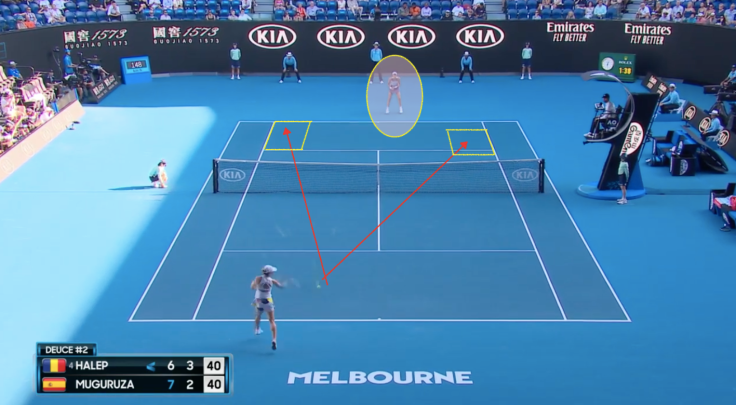 Similar story in a later round against Muguruza.

This time it is an inside-in forehand from Halep but also the way she begins with her body position and rotation she could easily pull it inside-out.

Inside-out is similar to that cross court running forehand in the way that it lands shorter in the court but the angle and the way the ball speeds off the court makes it impossible for the opponent to send back with interest or gain control of the rally.

Going further back to my trip to Madrid last year, sadly I thought I lost my videos from there but it turns out I didn’t and in one of them we saw the Halep forehand at full pelt…

It is the perfect motion, the way she glides around the court is outstanding.