Both players began by talking about the current situation and how they are finding isolation.

Andy spoke about how it’s given him the chance to see his kids do things on their own for the first time like ride their bikes and swim.

Novak who is use to the tour life and not spending time at home said it feels unusual and first time in over 15 years he’s been in one place for a long time. He and his family are residing in Spain and is grateful for the space the family have for kids to play outside.

To begin with they spoke about when they first met and it was in an event in France when they were about 11 years old.

Andy described it as a court without the doubles tramlines.

Murray lost in the final but remembers a match point he had and with a drive volley put it straight into the net.

Andy began to read out some questions and the first one he asked was best match between the two?

Novak said his was The Australian Open semi-final from 2012 which he won in five sets and just under 5 hours. The two reminicised about the match and the break point Murray had late on in the final set but a long rally went the way of Novak.

Novak did bring up another match which was the semi-final of the 2012 Olympics in London. Novak said he was ‘devastated’ by the defeat but happy with the way he played.

Andy spoke about the match and said recently his ex-coach Dani Valverdu messaged him after watching some highlights to say what a great match it was.

This was probably my favourite moment in their live chat talking bout reacting to wins.

Both said in hind-sight they should have celebrated winning titles more.

Andy started off by saying it was important for him to “voice something to his team he could have done better” despite winning the tournament he would continue to look to be better.

Novak agreed with him about enjoying the moments more but said he has always set short and long term goals in his career.

One of the toughest challenges for players is to go from tournament to tournament and adapt after winning an event which is something that spoke about especially changing surface.

Andy laughed saying obviously onto the clay but said one of the hardest is going from indoors to outdoors. He finds that transition difficult especially at majors where one day you could play under the roof like Wimbledon or US Open. He said however he had “no problem” shifting from outdoors to indoors.

Andy said one big problem he had was winning Olympic Gold in London on the grass at Wimbledon and then heading straight to Canada. Novak even said “I remember you watching you play, it was painful for me”.

Murray laughed and said after his match he said to his team this is awful and pulled out.

If you could go back and change a match what would it be?

Murray – “Match against you, which one do you think?”

Djokovic – “Must be at The Australian Open?”

Murray – “I would have loved to won both but clay was a tough challenge for me, biggest achievement in my career if I had won the French”

Murray – “Australian Open pretty painful thanks to you over the years”

AM – “we played in semi’s. I was pissed we got stopped end of third on day 1 due to bad light but won the fourth on Day 2”

Djokovic – “conditions more favourite for me end of day, cold and heavy clay.”

Djokovic – “two sets up and BP in third and he turned it around, 2nd day it was sunny and suited him”

Djokovic – “biggest moment of the tournament was Stan’s attire” Andy called his shorts  “horrific”  Djokovic – “hope you’ve burnt them. They were a lucky charm for him”

Andy brought the discussion onto, who is the GOAT in Men’s Tennis and what makes up the greatest?

Novak and Andy agreed that they don’t compare generations when in this conversation.

Novak said the most important things are…

“Combination of Slams, weeks as No.1, Masters 1000 and Head to Head” which Andy brought up and Novak thanked him for bringing it up. (Novak has a winning head to head against all top 4 players)

Djokovic – “I personally am very fortunate I’m in the conversation”

Murray reeled off stats he wrote down as that part of the conversation ended.

Pair speak about bringing their best to the slams and says it felt better to settle at a major.

Novak said it was because it’s what everyone dreams of winning and becoming world number one. Novak also listed Thiem, Tsitsipas and Zverev as three players maturing very quickly and close to winning slams!

Easily one of the most interesting parts of their Instagram live and Andy gave the categories of: Serve, return, forehand, backhand, mental, physical

Djokovic – “Isner/Kyrgios (Andy agreed), imagine if you gave Nick the height of John”

Murray – “I’ve seen him warm up and practiced with him”

Djokovic interrupts and laughs – “he warms up?”

Djokovic – “playing against you on any surface was a challenge, hardest to serve against you than anyone else. Everything was coming back.”

Murray – “I appreciated that, I’m taking you…”

Murray – “Rafa for me, being a lefty has helped him soo much with it”

Djokovic – “Also Stan especially on clay and is one of the best out there, it pushes you off the court. Medvedev backhand reminds me of yours (Andy’s)

Djokovic – “His ability to come up with serve and volley at big moments of the match is underrated and not intimidated by return, he would disrupt your rhythm and we’d prefer him on the baseline.”

Djokovic – “He takes away your time, quality of first volley and position at net underrated”

Djokovic – “Feliciano is good, I see he’s following this”

Murray – “don’t mention him, his head will get bigger!”

Murray – “I agree with Roger”

Djokovic – “Rafa for sure. Champions mentality on clay over the years bouncing back over the years. Intensity he brings, the jumping around intimates you and creates the challenge of a gladiator in arena. Mental and physical giant”

Murray – “you might disagree but with you it came later on”

Djokovic – “Rafa is up there,… Thiem or Ferrer. Ferrer’s righting spirit. I’d give Ferrer the edge.”

Murray – “I’d go Monfils as physical potential, it’s a joke the things he can do! I’ll take you.” 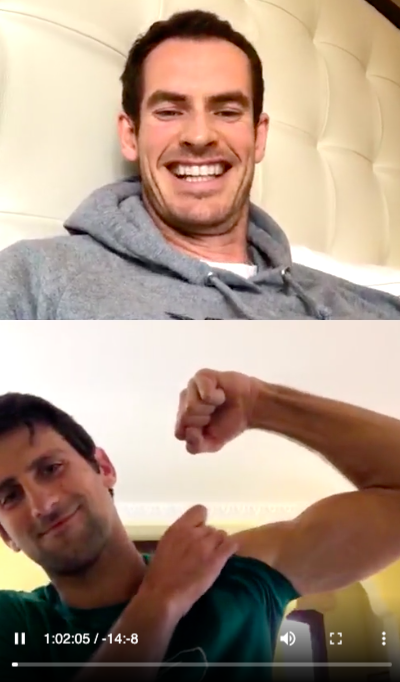 Murray jokes about the lack of bicep…

Favourite country to play in?

What would you do instead of sport?

Murray – “A footballer, would be good to be a doctor right now in times like this to help others”

First 3 things you do on a day?

Murray – “pee, kids out of bed and feeding the dogs”

Djokovic – “being late and inpatient”

That brought an end to the Instagram Live, it was a fun hour of discussion and something uplifting and a good distraction!